Git using https instead of ssh

The other day i found out our firewall blocks outgoing traffic except port 80 and 443.
(HTTP & HTTPS)
END_OF_DOCUMENT_TOKEN_TO_BE_REPLACED

Docker, Wildfly, your application and the dev life cycle

Hi, using docker it is very easy to have your web application available for testing in a non mocked environment. END_OF_DOCUMENT_TOKEN_TO_BE_REPLACED

You can have multiple ports redirected with a single SSH connection. END_OF_DOCUMENT_TOKEN_TO_BE_REPLACED

Some information and facts about my favorite SciFi Series
END_OF_DOCUMENT_TOKEN_TO_BE_REPLACED

For me adb is a great tool to interact with your device.
Here’s how to overcome the default lack of timestamps
END_OF_DOCUMENT_TOKEN_TO_BE_REPLACED

Today i wanted to use scm manager. This appliance is available as a virtual machine image. I chose the variant for VirtualBox.
END_OF_DOCUMENT_TOKEN_TO_BE_REPLACED

Today i want to start a new maven based project. The result should run on wildfly and should employ arquillian for integration testing.

I first read about arquillian back in february. i learned it was very tedious to get wildfly 8 and arquillian play nicely together. Thanks to my friends sorin and octavian for sorting out the difficulties (version number hell comes to my mind) .

i stumbled upon an article by arun gupta telling about a maven archetype to create a project together with arquillian configuration for wildfly and glassfish:

The result is a configuration supporting wildfly 8 and glassfish 4 – both remote and managed.
Pom.xml contained (at least in my case) a commented profile for wildfly embedded – simply remove it.

In my case i removed glassfish stuff, too.

Both remaining profiles (wildfly-remote-arquillian and wildfly-managed-arquillian) worked out of the box.

I tested with wildfly 8.0.0.Final and 8.1.0.Final. The latter after changing a property value in pom.xml:


Thanks to @aslakknutsen for making use of arquillian that easy and to Arun for blogging about it.

Updating wildfly installed by homebrew is as easy as it could be:
1. update brew packages
2. upgrade wildfly

Terminating multiple processes at once with OS X

I really like the activity monitor that goes with os x. But sometime it sucks. For example when you want to kill a group of processes. You can mark multiple entries in the process list but you can not end those.

In my case i had trillions of google chrome helper tasks: (maybe because i keep too many tabs open?! naa, has to be caused be some weired 3rd party plugins 😉 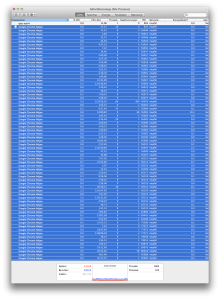 The solution is – as it often is – using the command line: “killall”

The latter command simulates (“-s”) what would be done by “killall”. Using “wc -l” we want to count how many process would be killed. 83 is way to high a number for doing it manually.

Lets see the effect of “killall” without simulation: All google chrome tasks are dead now. And the process list shows only the main chrome process.

Of course you have to be carefull which bunch of processes you terminate. Especially because killall support specifying a regex pattern to match the process to kill  – as always:

This is not intended to be a complete of online editors – just the ones i use from time to time.
A more complete list of editors can be found here: http://alternativeto.net/software/liveweave/